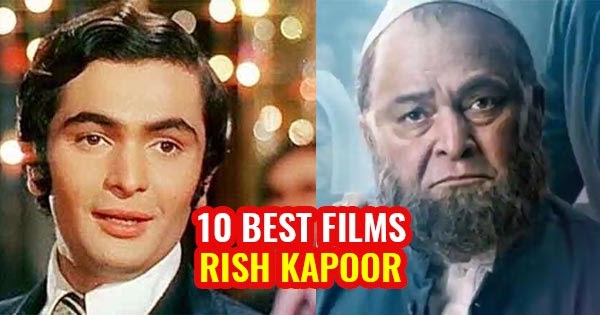 Check out these 10 popular and best films of Rishi Kapoor that you must watch – entertaining, successful and critically acclaimed.

Rishi Kapoor, the legendary Bollywood actor just passed away on April 30th 2020 and not just his family and close friends but whole film Industry and fans felt the loss of this great actor. Rishi Kapoor has been one of the most successful and respected actor of his time who was still working. His last film was The Body with Emraan Hashmi, which came out in 2019.

Rishi Kapoor made his acting debut in 1970 with the film Mera Naam Joker and became a star with his first film as a lead actor – Bobby in 1973.

The actor won a National award and multiple Filmfare and Zee Cine awards for his number of great performances.

Here are 10 most popular and some of the best films of Rishi Kapoor that you should check out if you haven’t seen them already:

Amar Akbar Anthony has been a classic where Rishi Kapoor shined in his performance as Akbar.

Karz has got a cult classic status with unforgettable songs.

Rishi Kapoor gave one of the finest performance of his career playing the role of Devdhar.

This Rishi Kpaoor film was selected as India’s entry to Oscar for best foreign film award.

Rishi Kapoor shined as a romantic hero and did a number of love stories with Chandini being most popular one.

Do Dooni Chaar was the film where Rishi Kapoor showed his different side as an actor and it is one of his best performance.

Rishi Kapoor played a negative character with such ease and beauty in this successful remake.

Mulk is another one of the best performances of Rishi Kapoor in which he played a Muslm man.

In Commercially and critically successful film, Rishi Kapoor stole the show with his performance.