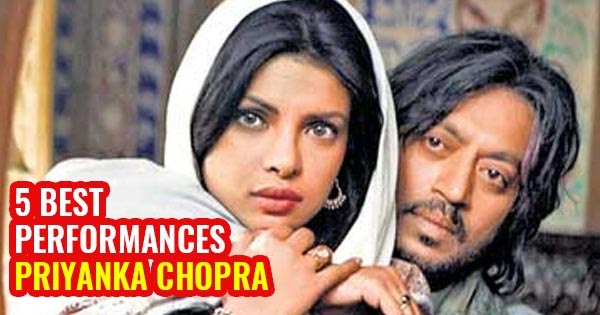 Priyanka Chopra is one of the top Indian actresses working in Bollywood as well as Hollywood. The actress has grown a lot and became one of the most influential women and a global icon. While Priyanka Chopra is known for her beauty, style and oozing hotness… the actress has also impressed us with some good acting skills in many of her performances.

Since becoming Miss World in 2000, It has been 20 years of Priyanka Chopra in the Industry and she only keeps surprising her fans with more of her work.

Here are 5 performances of Priyanka Chopra which became memorable.

Whenever Bollywood would talk about women in negative roles, Priyanka Chopra’s performance as Sonia will make the list. The actress stole the show with her sensuality and boldness and made Aitraaz to be remembered as her film.

Priyanka Chopra appeared in a completely different role pushing her boundaries with Ranbir Kapoor in Barfi when she played the role of Jhilmil who is autistic.

Priyanka Chopra’s 7 Khoon Maaf was a big critical hit earning her many awards for her performances. Priyanka was seen at her best in the movie which tells the story of a woman causing seven deaths.

Fashion, a film by Madhur Bhandarkar based on fashion industry showed some harsh realities and shocking ugly truths about the industry and Priyanka Chopra did full justice to her character of a model in the film and earned much appreciation and awards.

While there are few other performances that could have made to this no. 5 spot, Priyanka Chopra’s performance as Kashibai stole the show in the film even though Deepika Padukone had bigger role in the film.