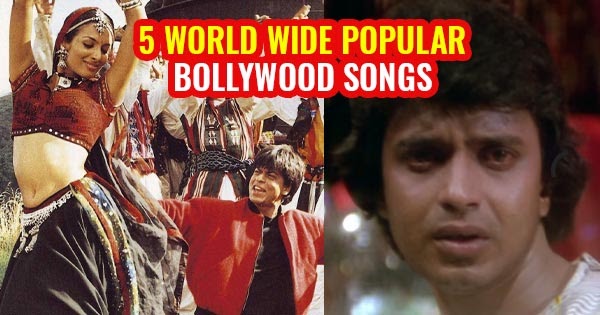 These are the 5 Indian songs which are popular all over the world and received awards and recognition as well.

Bollywood is a lot about music and songs and Indian music has been fascination many artists abroad as well. Here we are listing 5 Indian and Bollywood songs which made much impact not just in India but all over the world.

These are the songs which were recreated in different languages, people couldn’t stop dancing to these tunes and some even got prestigious awards while becoming an anthem as well. While Indians are all over the world so expansion of Bollywood music is not very strange but still these five songs made a huge impact on the non-Indian audience as well.

Also, we are only mentioning the songs which have a certain quality and are considered to be best, so the songs based on just YouTube views popularity or viral Tik Tok and cover videos is not taken in consideration… they deserve a separate list.

When you hear this one word ‘Urvasi’ twice, the first thing comes to your mind is Prabhu Deva’s magical dance, right? Originally a Tamil song, it became a hit after it’s Hindi remake. The song was then recreated by world famous rapper and music producer, Will. I. Am and singer Cody Wise with the title ‘It’s My Birthday’. The song was then recreated in Bollywood featuring Shahid Kapoor and Kiara Advani.

Awaara Hoon is a timeless hit which gained much popularity all over the world including Russia, China, Turkey and Greece. Many recreated their own version while other performed with same lyrics and immitated the style and costume of Raj Kapoor, on whom the original song was filmed as well.

Chaiyya Chaiyya, the song that instantly reminds us of Shah Rukh Khan in red jacked dancing on a train with Bollywood’s dancing queen Malaika Arora is a timeless classic. The song has been ranked in 100 most popular songs of all time’ it was in top 10. The song was also used in Hollywood film, Inside Man, feeling proud to know a Hollywood film used Bollywood song?


Jimmy Jimmy is all time most popular Indian song. The song has been recreated in many other languages in many countries all over the world and made everyone dance. Hollywood artist M.I.A recreated the song with Bappi Lahiri in 2007 as well. It’s a gem from Bappi Lahiri.

Jai Ho might not be as popular as Jimmy Jimmy but the song did turn into an anthem for every Indian. Not to mention A. R. Rahman won Grammy and Academy Awards for the song as well. Hollywood band Pussycat Dolls collaborated with A. R. Rahman to create an English version as well.