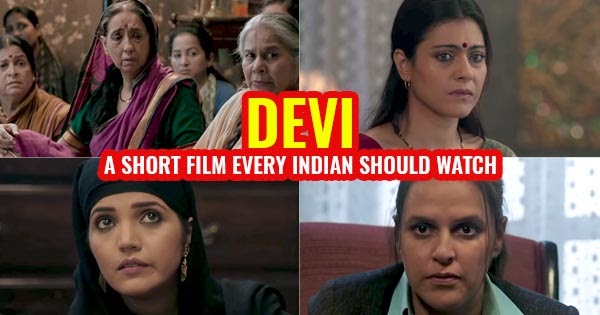 Devi, a short film on rape cases in India, says a lot in just 13 minutes – it’s a must watch by every Indian.

Devi, a short film by Priyanka Banerjee says the bitter truth about India, it’s government, law and safety for women. Featuring Kajol, Neha Dhupia, Shruti Hassan along with Neena Kulkarni, Mukta Barve, Rama Joshi, Sandhya Mhatre, Shivani Raghuvanshi and Yashaswini Dayama, the short film is shot in a closed room with all the women sitting around talking and watching TV.

Surprisingly, no actress clearly says anything or uses the word ‘rape’ but the brilliant writing and acting says it all where you do not want to miss a single second of it. All the actresses played different characters who comes from different background, religion and age. Some played housewives while other working modern woman, some are wearing sarees while others wearing more revealing and modern clothes, but one thing is common between all of them.

Women – file cases of dead women who were being raped.

The room is filled with all these women and again a door bell rings wanting to come in the room, but there is no more space in the room for more women. It implies how there are so many rape cases going on in India and every day new ones join the big stack of files. The women watches TV hoping for some good news everyday but there is none to make anyone happy, which implies how judicial system fails to solve the cases and punish the criminals. The short ends as a girl child joins the room as well.