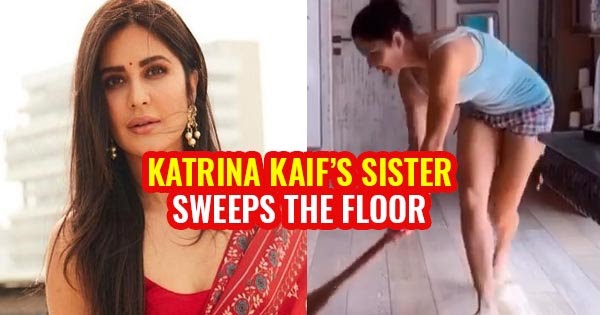 Katrina Kaif’s sister Isabelle Kaif does house chores – sweeps the floor while Katrina does the commentary on first day of lockdown in India.

Isabelle Kaif is helping her sister and bollywood actress, Katrina Kaif, in doing house chores. The actress and model sweeped the floor while Katrina made a video and did commentary. Isabelle Kaif has appeared in a few ad commercial.

Isabelle has also appeared in British, Canadian and Mexican films. Isabelle hasn’t worked in a Bollywood film or music video and fans are eagerly waitinf for it.

“Day 21 🔐-One day at a time guys…….we all gotta do our part,” Katrina Kaif said in her shared posts on social media.

Earlier the video of Katrina Kaif working in the kitchen and doing dishes went viral, and now sister Isabelle Kaif is trending for cleaning the house with a broomstick.

Bollywood celebrities have been very active on social media lately for encouraging people to follow the instructions and stay at home as PM Narendra Modi announced the lockdown in India.