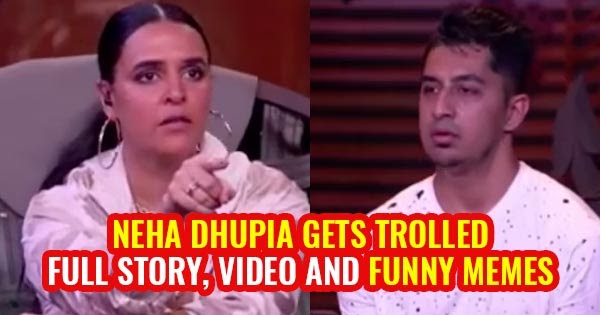 Neha Dhupia supports cheating in your relationship? MTV Roadies mentor gets trolled for shouting at a guy who slapped his girlfriend after finding out she was cheating on him.

Neha Dhupia is the latest victim of trolling on twitter. The whole thing started from an incident on MTV Roadies Revolution. A man auditioning for the Roadies, told his story about how his girlfriend was cheating on him with five other boyfriends. The man gathered all the five boyfriends and slapped his girlfriend in front of them.

Watch the video of Neha Dhupia’s controversial comment which led to hilarious memes.

Neha Dhupia, who is a mentor in MTV Roadies, shouted at the man auditioning in the show and supported the girlfriend saying it’s her choice if she wants to be with five other men and maybe the problem was in the guy himself. Neha tried to support feminism but it didn’t go well with many because most people wouldn’t like if their partner is cheating on them, right?

So the netizens got on twitter and started trolling the actress with hilarious memes and how Neha is supporting fake feminism.

Twitterati are also trolling the other male mentors and host of the show – Nikhil Chinappa, Prince Narula, Raftaar and Ranvijay Singh respectively, for not taking a stand againt men because cheating in a relationship is not fair.