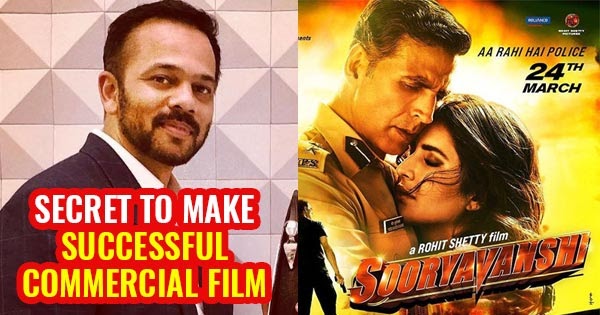 Sooryavanshi director, Rohit Shetty, talks about how he make such successful commercial films which goes well with the audience.


Rohit Shetty is one of the biggest and most successful directors in Bollywood right now. Backed by his team which consists more than 400 people, the director is best when it comes to action or comedy. Rohit is the first in Bollywood to create a cinematic universe where characters from one film are seen in another and the stories are somehow interconnected (like Marvel’s Avengers).

In a recent interview with Film Companion, Simmba director revealed how he makes films which are so successful on box office. Rohit said that he somehow understands and knows his audience. Rohit is unapologetic for his larger than life films where action looks unbelievable, and he makes such films to cater his audience and fans.

Rohit recalls how he knew exactly where people would clap and whistle in Simmba and most of the time he is right about where people get high watching these big entry of heroes or some action scene. In a way, Rohit gave out a big tip and secret for many filmmakers, which is to know your audience and try not to please everyone… because you really can’t.

The director also knows his movies are watched by kids so he decided to beep a curse word in Sooryavanshi as well. Sooryavanshi features Akshay Kumar and Katrina Kaif as lead with Ajay Devgan and Ranveer Singh making appearances as well. The film will be released on 24th March.