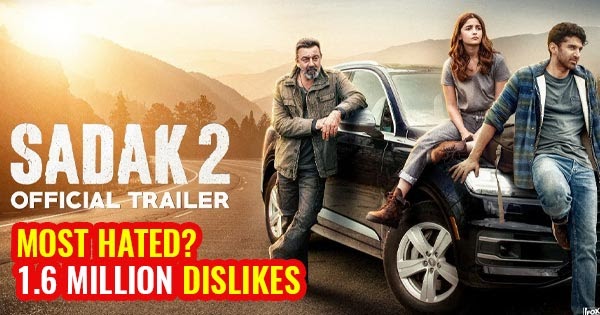 Is Sadak 2 going to be the most hated film of 2020? The trailer of Sadak 2 is out and received 1.6 million dislikes in 6 hours.

Alia Bhatt, Sanjay Dutt and Aditya Roy Kapoor starrer much awaited Sadak 2’s trailer is out now, but the response is something makers wouldn’t have expected while making the film. With in 6 hours of it’s trailer release, Sadak 2 has recieved over 1.6 million dislikes as compare to 108K likes and 3 million views.

Mahesh Bhatt is making his comeback as the director after 21 years with Sadak 2. His last film as a director was Kartoos. Alia Bhatt and Aditya Roy Kapoor will be seen together the second time after Kalank which was called one of the disasters of Bollywood.

The film will be released on Disnep Hotstar and earlier the topic of boycotting Hotstar along with bollywood films was trending on social media.