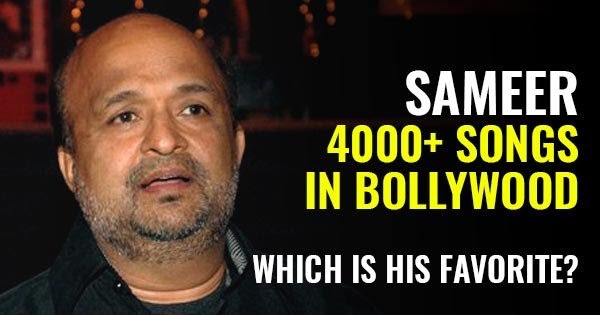 Bollywood’s legendary lyricist, Sameer, has over 4000+ songs credit under his name – which one is his favorite?

Sameer, the name would sound familiar to any Bollywood film lover because this name has over 4000+ song writing credits under his name. Sameer, the son of a popular lyricist Anjaan, has given some beautiful gems to Bollywood in his career that has spanned over four decades.

Aashiqui, Saajan, Kuch Kuch Hota Hai, Kabhi Khushi Kabhi Gham and Faltu are some of the films which had songs penned by this romantic genius. I said romantic genius… because no one writes romantic songs like Sameer does.
For Kuch Kuch Hota Hai, Sameer shared the fact how no song in the film clearly says ‘I love you’ because Shah Rukh Khan’s character Rahul didn’t know if he really loved Rani Mukherjee or realized that he was in love with Kajol. Sameer shared in aan interview with RJ Anmol that he had a girlfriend who made him the lyricist he is.

But after writing 1000s of songs and each one being loved by so many fans and everyone having their favorite song of Sameer, which is Sameer’s own favorite song? And the answer is ‘Saanso Ki Zarurat Hai Jaise…’ from Aashiqui.

Sameer wrote the song when Mahesh Bhatt insisted that he wants to make the movie using all the previous written  and composed songs of an album named Chahat but he wants a title track for the film and the title of the film was Aashiqui.