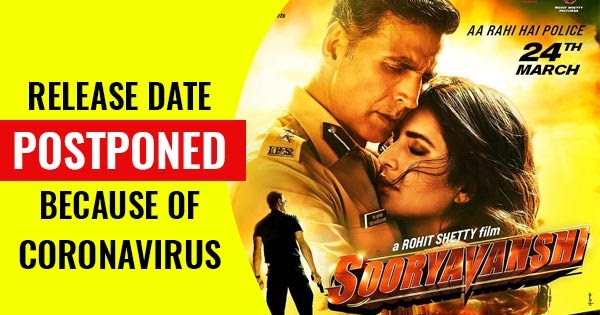 Sooryavanshi release date has been postponed since after Kerala and J&K, Delhi also decides to shut the theaters to counter Coronavirus.

Bad news for Rohit Shett’s directed film Sooryavanshi’s fans, as the release date of the film has been postponed with no new date yet. The team of Sooryavanshi shared  the news through posts on social media .

As more cases of Coronavirus are coming out in India, Delhi has decided to shut down the theaters to counter the virus that is spreading all over the world. And now it seems it is affected Bollywood and it’s business as well.

Before this J&K and Kerala were reported to shut down theaters as well. This is the second time that the release date of the film has been changed. Earlier the film’s released was shifted to an earlier date as Mumbai announced to keep the theaters open 24 x 7.

Now since theaters are going to be completely shut till further notice, it will hugely affect the film’s business and film lovers will decide to go out and watch their favorite stars in this action packed film risking their lives.

Sooryavanshi is the part of India’s first cinematic universe created by Rohit Shetty and Team. The film features Akshay Kumar in lead role with Katrina Kaif, as other cop characters like Singham – played by Ajay Devgan and Simmba – played by Ranveer Singh also makes appearances.