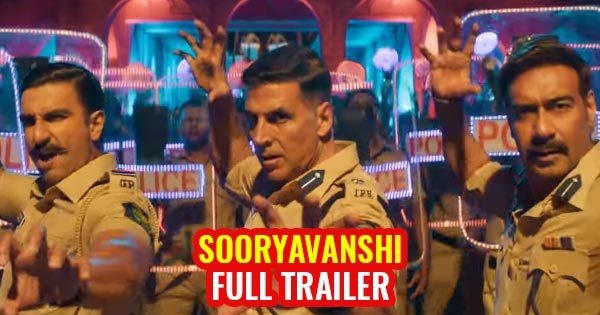 Sooryavanshi has been one of the most awaited films of Rohit Shetty featuring 3 big stars – Akshay Kumar, Ajay Devgan and Ranveer Singh along with Katrina Kaif, who looks promising in her character as well. The full trailer of the film just been released and it looks full on action packed but again Ajay Devgan’s grand entry in the trailer outshines everything.

The film also stars Jackie Shroff, Gulshan Grover, Abhimanyu Singh and Niharica Raizada. The film’s story is about sleeper cells planning a big horrible event and Akshay Kumar and team finding all of them to stop the tragedy.

Akshay Kumar is seen in more serious role rather than just jumping around doing action scenes… or maybe the filmmakers are trying to save his action scenes for the film and not show it in trailer, but as far as action goes… the trailer doesn’t reach upto Akshay’s previous action flicks.  Ranveer Singh cracks a few jokes while Ajay Devgan steals the show here with his entry in an armored truck.