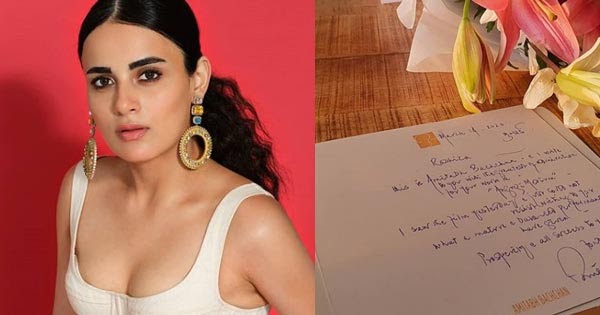 Radhika Madan, the actress of Angrezi Medium received a letter of appreciation from Amitabh Bachchan – actress says she always imagined of it.

Radhika Madan, who has impressed everyone with her performance as the daughter of Irrfan Khan’s daughter in Angrezi Medium is on cloud nine right now, as she received a letter of appreciation from Bollywood’s mega star, Amitabh Bachchan.

Radhika, who rose to fame with the TV show, Meri Aashiqui Tumse Hi, has emerged as a fine actress who earlier impressed critics with her performance in Pataakha and Mard Ko Dard Nahi Hota, and now her latest released Angrezi Medium has brought her one of the biggest achievements of her life, which is Amitabh Bachchan appreciating her performance with a hand written letter.

The 24-year-old shared a the photo of the letter and flowers sent by Amitab Bachchan on social media writing about how she always imagined of it and how it has motivated her to work harder.

Angrezi Medium’s box office business has surely been affected by Corona Outbreak, but it has received much appreciation from critics, specially Irrfan Khan who shines and gives another best performances proving why he is the best actor India has.