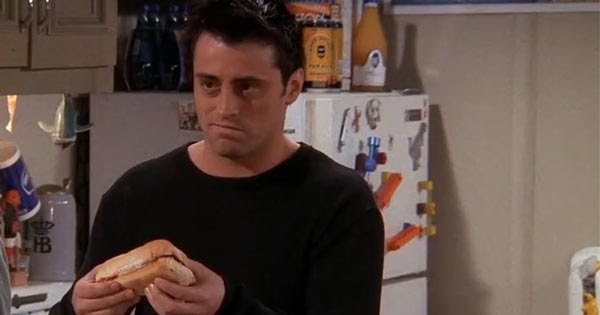 Remember FRIENDS episode when Joey Tribbiani shared his sandwich with his friend?

“Joey doesn’t share food”, you know this even if you are not one crazy fan
of the show – Friends. The phrase Joey doesn’t share food became as popular as We were on a break, and has given us
some of the best moment from FRIENDS including the one where Joey’s date
goes horribly wrong after he doesn’t share his food with his date but when
she goes to use the restroom, Joey eats her cake and goes, ‘I am not even
sorry’.

Remember the episode when three boys – Joey, Chandler and Ross goes out with
Phoebe’s cop boyfriend and they mistook a car backfire with a bullet fired
at them. Joey siting in the middle of Ross and Chandler in the backseat
leans over to Ross hearing the bullet sound. Chandler feels bad that Joey
went on to save Ross instead of him.

When Joey and Chandler goes back home, Joey explains that he wasn’t trying
to save ross but his sandwich which was next to Ross and just to show how
much Chandler really means to Joey, he offers his ‘best sandwich in the
world’ to Chandler. However, as Chandler goes to take a second bite of the
sandwich, Joey stops him going back to ‘Joey doesn’t share foor’.